Variables (also referred to as aliases) are commonly used values designed to be referenced in any of your scripts.

You can either define your own variables or you can use this list of pre-defined variables. 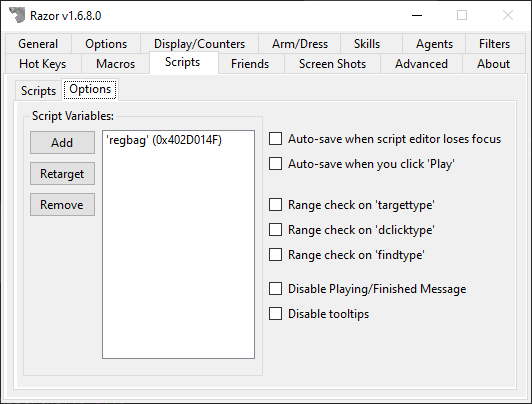 Simply click Add, give it a name and target the item or mobile and that variable is available in your scripts. In the screenshot above, regbag is set to a bag. To use this variable in a script, you simply reference it.

You can also set variables in scripts by using the setvar command. To update the regbag command, you might do something like this:

Along with defining your own variables, you can use these pre-defined variables in your scripts.

When using for or while you have access to the index variable. This can be used with overhead (for example) to indicate the current loop number.

For example, this script snippet will output the numbers 0-9 overhead every second.