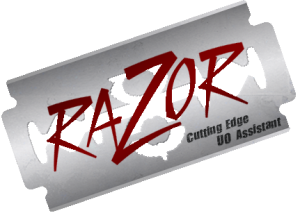 Razor is a free tool designed to help with simple tasks while playing Ultima Online.

This guide was written for the Razor Community Edition.

For more information about this version of Razor, read the history, review the release notes and download Razor.

The goal of this project was to revive and continue development and maintenance of the abandoned Razor project, focusing on quality of life improvements while attempting to keep the spirit and vision the original developers had for Razor by not driving down the path of advanced automation that's found in other UO assistants.

Razor was originally designed by Bryan Pass, known as Zippy in the RunUO community as a replacement to UOAssist. Based on commit notes, active development (new features, bug fixes) on Razor ceased some time in the early 2010's with the source code being released in 2014.

The code initially didn't include Crypt.dll and Loader.dll which are required to fully integrate with the UO client. At some point, the code for those projects released into the same GitHub repo.

The original project was last updated May 2nd, 2014 which was simply an update from .NET 2.0 to .NET 4.0 and while over 50 forks exist on GitHub, none of them have been active or have made significant changes except for a few exceptions:

Another closed source version of Razor exists (the 1.0.14.x versions) that was maintained by a private shard that made some enhancements, notably around targeting. This version of Razor has long since incorporated the majority of changes you can find in that version.

In June 2019 integration into ClassicUO was officially established.

In March 2020 the Razor Scripting Engine was added to make it easier to read, create, edit and share Razor scripts while staying true to the project's state goals.

When I started this project back in early 2018, nearly all the feedback, ideas, discussion and testing came from the UO:Renaissance community, one of the only freeshards where the rules only allow for the use of Razor. The original UO:R Community Edition name was used to not only distinguish between other versions of Razor that were available but give credit to a community that provided so much support early on.

As the popularity of this version grew, especially after the implementation of ClassicUO support, it became widely used across the whole UO freeshard community, from small private shards to some of the largest shards in the community and continues to be built on the feedback and contributions from all different corners of the community.

With that said, I find it more appropriate to simply call this version the Razor Community Edition.

Thank you to everyone across the whole UO freeshard community who has contributed to this version of Razor in some way.

If you'd like contribute, see the CONTRIBUTING file for more information.

If you're unable to find a solution using the information here or you'd like to submit a feature request or bug report, use the following resources.

For more information about the Razor Scripting Engine, go here.

All work is released under the GPLv3 license. This project does not distribute any copyrighted game assets. In order to run this application you'll need to legally obtain a copy of the Ultima Online Classic Client.

See the LICENSE file for details.